Random picks and thoughts of a Librarian 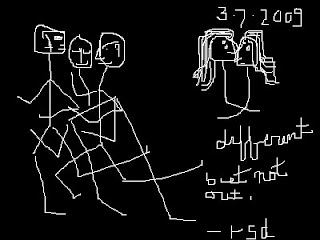 Friends, it is indeed a remarkable moment in Indian history with regard to gay culture and gay rights. There is nothing unnatural or irrational about being a gay. Ofcourse every culture, society defines the way its members should act ... behave. Right and wrong is always a subject of debate any way.

titbits for librarians and book lovers :

Book: Gay Life & Culture: A World History
In the years since Stonewall, the world has witnessed an outpouring of research, critical inquiry, and re-interpretation of gay life and culture. This book draws on groundbreaking new material to present a comprehensive survey of all things gay, stretching back to ancient Sumeria and ranging to the present day. Critically acclaimed historian Robert Aldrich and ten leading scholars juxtapose thought-provoking essays with an extensive selection of images, many never before seen. This masterful combination reveals the story behind gay culture from the industrialized world to the remotest corners of tribal New Guinea. Among the contributors are noted names in GLBT studies such as Brett Beemyn (author of Bisexuality in the Lives of Men), Charles Hupperts (expert on classical antiquity at the University of Amsterdam), Helmut Puff (University of Michigan expert on the medieval world), and Florence Temagne (author of A History of Homosexuality in Europe). The book covers such topics as the Old Testament relationship between Jonathan and David, the Age of Confucius, Native American berdaches, Polynesian mahus, Berlin in the '20s, Stonewall and the disco-flavored hedonism that followed, and the advent of AIDS, Act Up, and Angels in America. This book is an important contribution to understanding what makes gay life and culture universal throughout human culture and across time.
http://www.flipkart.com/gay-life-culture-robert-aldrich/0789315114-v6w3ffvxtf

Thursday, Jul 02, 2009 , India
The Delhi High Court on Thursday ruled that homosexuality is no more a crime. The verdict brought happiness and cheers to the Indian gay activists. Gay activist Arvind Narayan spoke to NDTV about the verdict.
http://www.ndtv.com/news/videos/video_player.php?id=1132014

Librarians continue to be knowledge professionals. Would you like to communicate to the Principal Blogger of India Librarian directly? email to .- lotus5673@yahoo.co.in .- 1816gbgv
knobits and knowbytes RajLibrarian at 10:15 AM No comments: Links to this post